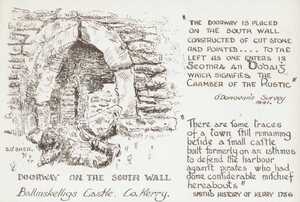 Sean was born in Cahirsiveen in 1916 but taught in Dublin for most of his life. His talent for map production went back to the early 1960’s, when he put together an 1851 map of the town for the local C.B.S. Centenary celebrations. Soon after he produced an expert illustrated history of the Farranfore – Valentia railway line, which sadly by then had closed down. Other works inc luded Maps of Tralee, Glenbeigh and Waterville. The Map which is course most synonymous with my father is the map of the Iveragh Peninsula.

The Maps are Historical, Archaeoogical Guides to the areas they depict.

A major coup for my father was his collection of old photographs of Irish life and towns and villages from the late 19th to the early 20th Century.

These formed the nucleus of my business which I started in 2000. These Historical prints and maps etc. can be purchased at Cafe Cois Tra Ballinskelligs Co Kerry and here on this website.

As a school mate of Sigerson Clifford’s – well known poet and playwrite. My father used his poetry on xmas cards of Cahirsiveen. I continue this tradition and I sell a wide selection of xmas cards of the area.

I also sell Local books cd’s etc. My most popular book is “The Skellig Guide” by Tim O’Shea I cannot keep enough of them in stock.

This site uses cookies to ensure you get the best shopping experience possible. . By continuing to browse the site, you are agreeing to our use of cookies.

We may request cookies to be set on your device. We use cookies to let us know when you visit our websites, how you interact with us, to enrich your user experience, and to customize your relationship with our website.

Click on the different category headings to find out more. You can also change some of your preferences. Note that blocking some types of cookies may impact your experience on our websites and the services we are able to offer.

These cookies are strictly necessary to provide you with services available through our website and to use some of its features.

Because these cookies are strictly necessary to deliver the website, refuseing them will have impact how our site functions. You always can block or delete cookies by changing your browser settings and force blocking all cookies on this website. But this will always prompt you to accept/refuse cookies when revisiting our site.

We fully respect if you want to refuse cookies but to avoid asking you again and again kindly allow us to store a cookie for that. You are free to opt out any time or opt in for other cookies to get a better experience. If you refuse cookies we will remove all set cookies in our domain.

We provide you with a list of stored cookies on your computer in our domain so you can check what we stored. Due to security reasons we are not able to show or modify cookies from other domains. You can check these in your browser security settings.

We also use different external services like Google Webfonts, Google Maps, and external Video providers. Since these providers may collect personal data like your IP address we allow you to block them here. Please be aware that this might heavily reduce the functionality and appearance of our site. Changes will take effect once you reload the page.